The first part of the workshop cycle conducted in the Day Care Department is over. Six meetings, each lasting two hours and a half, were concluded by a short presentation. The actors and the audience. This is what makes theatre so special and unique.

However, the goal of this specific workshop is broader than simply reaching for some artistic effects. Create a puppet – create yourself! Puppets should be engaged in a therapy process of the psychiatric patients. I had some doubts at the beginning, even though the Head of the Department assured me that in his opinion, visual theatre should work quite good here. But knowing the power of a puppet, I was afraid that it can be too strong and overwhelming experience for the patients. In a way we both were right.

We started with the short presentation of a puppet etude by our amateur (but in fact semi-professional) actors, who traveled the long way from Bielsko-Biala with us for the first workshop meeting. This was a very good way of introducing ourselves and the project to the patients and hospital staff. Our paper puppet – the Drunker from the “Birds of passage” http://www.teatrgrodzki.pl/book/teatralne-spotkania-pokolen/ (the performance starts at 16 minutes. 50 seconds) gained a true appreciation of the audience. The patients (and also one of the therapists!) were motivated to try their hands at making their own puppets. It is amazing that almost always people get so deeply involved in the puppet making process. By the end of the session we all could sit in a circle with the newly born creatures. And I was wondering, what to propose next…

Inspired by the genius loci, I got an idea how to develop the stories by individual participants. I asked them to create an obstacle they face in their life, using paper or other objects available in the workshop space. Different visual and metaphorical images were created. Some of them very meaningful and giving an insight into the inner world of the patients. I was especially moved and intrigued by a simple paper frame. It could become a window, a swing, or a cage for the paper girl wearing a colorful dress. Someone else placed the puppet on a symbolic representation of an island and another patient made a head of a green crocodile. There was also a mountain constructed out of chairs and fabric blocking the way of the puppet. Another character was simply holding a small piece of red fabric and kept raising it up to stop anyone approaching. One of the participants covered his puppet with a big sheet of paper letting only small parts of its body to stick out. One of the puppets got her hands tied to the head and another one was standing in front of the wall. Thus, the stories started to emerge…

We decided to stage two of the stories first, since their authors (and main heroes in the same time) were about to complete therapy and leave the hospital. The participants worked in two groups. One focused on the puppet trying to climb the mountain, and another was working with the paper girl and her frame. The working process of the first group went rather smoothly and calmly, while the second team was struggling with difficult emotions and high level of tension. In their case the action on stage was too close to reality. The actors tried to precisely recreate what happened in the past to the patient, who played the main role, animating her puppet. This proved to be too hard for her, so it was necessary to change the plot. We had to find a more symbolic and general representation of this personal story and its author decided to step out of the play and stay in the audience.

One thing was very encouraging and inspiring in the process leading us towards the presentation. One of the participants spontaneously took the role of a director and combined the two stories into one whole. We did not have much time to rehears but the final presentation attended by all the patients and staff was rewarding. It gave us all the feeling of fulfillment. Some people say that the process is the most important, much more important than the result. But why to separate the result from the process? Theatre needs the audience to exist. 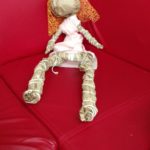 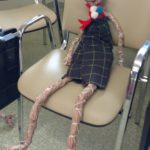 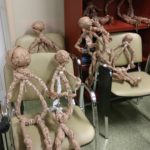 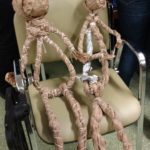 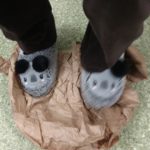 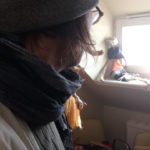 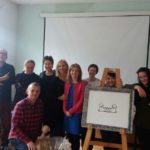